Here are nine reasons you must visit Tybee Island in June.  We’ve been waiting on summer all year long and it’s finally here.  Just look at these amazing events, adventures, happenings and more to celebrate our cottage charm and coastal calm this month!

Family Movies All Summer Long, Every Tuesday, Wednesday and Thursday

With show times at 3 p.m. and 7 p.m., this will be great, cool entertainment for the whole family. In addition, their Gray’s Reef Tuesdays series debuts with extraordinary, ocean-themed documentaries. Up next, Moana on June 6, Fantastic Beasts and Where To Find Them on June 7, and The Jungle Book on June 8.

Buy your ticket and get ready to slap your knee at the uproariously funny shenanigans of comedian Johnny Mac.  It’s the first Comedy Night of the season for TAA and there’s no better funny guy to lead the laughs.  Proceeds will benefit Tybee Meals on Wheels and it will be held at TAA’s Black Box Theater.  The show starts at 8 p.m. and the tickets at $10.

Come to the Tybee Island Light Station for a guided after hours’ sunset tour. These small, private tours last about ninety minutes and include a climb to the top of the lighthouse and tour of the grounds. RSVP for this small, intimate tour ASAP.  Tickets are $25 per person and non-refundable. No children under the age of 12.

The group will release its newest studio album to the Coastal Empire in this special show.  Themes of sea, sun, and spiritual connection weave through the eight-track release combining a cohesive blend of Alt-Americana, Island Grooves, Folk and Jam.

This is a monthly showcase for Savannah-area musicians that brings you the best in live, local music.  This month’s showcase features the American Hologram and Payne Bridges.  Performances will be at Tybee Post Theater at 8 p.m. and tickets are $15.

Angela Beasley’s Puppet People are a nationally acclaimed life-size puppet company, and they’re bringing a series of shows and puppet-making workshops to the Post Theater this summer. You’ll be thrilled to be here to visit Tybee.

Summertime Movies in the Park, June 17

Tybee Island’s Development Authority/Main Street Program will host movies in the park this summer at Memorial Park.  The first movie will be “SING” and will begin right after sunset!

The Tybee Post Theater and the Georgia Council for the Arts are bringing back the Post’s acclaimed Silent Cinema Concerts program with a screening of Buster Keaton’s “The General,” widely considered one of the best silent film comedies, accompanied by a chamber ensemble of the Savannah Philharmonic and Rodney Sauer on the Steinway grand performing the original score. Show times at 3 p.m. and 8 p.m.

It’s back to the beach for a collection of sexy lifeguards, Tybee Beach, that is. One weekend only. Four screenings: Friday, Saturday. and Sunday, 7 pm. and also a Saturday matinee at 3 p.m. 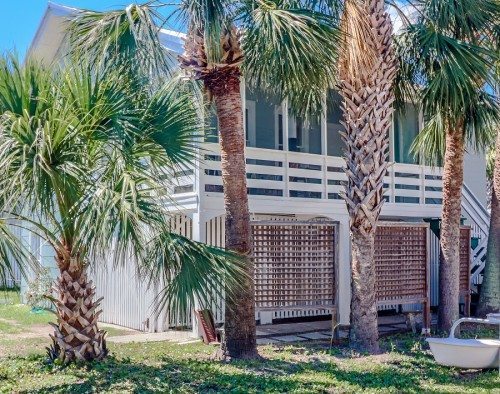 Of course, every great Tybee Island getaway begins with you choosing a vacation rental from our Mermaid Cottages Collection.  We’re especially proud to debut Sandpiper Cottage, a freshly restored, vintage cottage by Elizabeth Demos Lifestyle.  Email visitmermaid@gmail.com or call 912.704.4618 and our Mermaid of the Day will help you plan your to Visit Tybee Island!