Our Guide Dog journey is a long, organized, goal oriented and task-based curriculum with no room for error or failure. Her graduation will present her into the world to really make a difference. A life changing difference for a person with a disability.  We are excited and very pleased with MC’s accomplishments and evaluations, so far.  Here’s what we learned about MC this week.

“The puppy raiser reunion was a success! At the reunion the puppy raiser got to see MC work a route, as well as meet MC’s handler and spend some time getting to know him. Now the student matched with MC has another two weeks of on campus training before the two of them will graduate.”
The candidate matched with MC also shared a little of his journey, too. 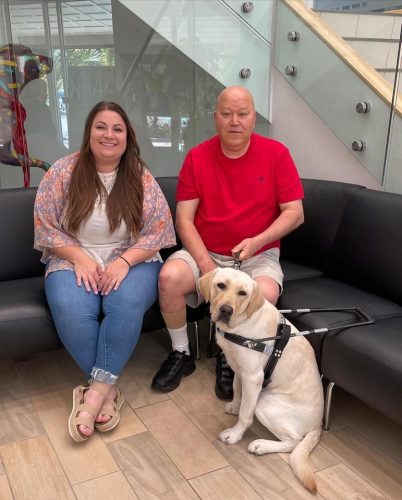 “MC’s candidate says he has never experienced good vision, but things got worse when he developed diabetes and then diabetic retinopathy. Despite eye injection treatments, infection and a detached retina reduced his vision to just a trace in his left eye and nothing in the right. A doctor suggested he might benefit from a guide dog, and research led him to Southeastern Guide Dogs.
When MC’s candidate first met MC, the first thing the new handler noticed was her beauty. Yet it didn’t take long for this trophy shop owner to start visualizing new freedom and confidence with such a hardworking dog by his side. ‘MC seems to want me to put the harness on her. Her whole demeanor changes, and she does exactly what she’s supposed to,’ he notes. ‘I’m not worried about running into things or falling off curbs. It’s a liberating feeling that you can get out there and do things more on your own.’
MC’s candidate is ready to suggest that we take a cue from Disney and revamp the school’s motto. Disney may be ‘the happiest place on earth’ and the Magic Kingdom may be ‘the most magical place on earth’, but this graduate believes that Southeastern Guide Dogs is the ‘greatest place in the universe’. Go graduate candidate and guide dog MC.” 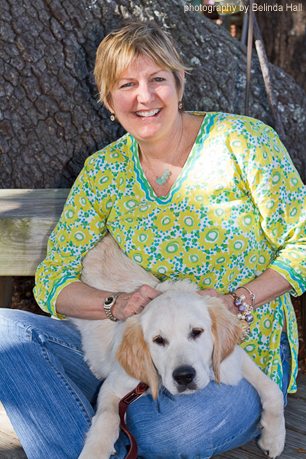 MC is sponsored by the Savannah Puppy Raisers who raised her and named in honor of Diane Kaufman and Mermaid Cottages on Tybee Island, in appreciation of Diane’s generous support of Southeastern Guide Dogs. Portions of the profits from Mermaid Cottages’ pet-friendly rentals and proceeds from their Beach Bum Biscuits help sponsor puppies to be trained as guide dogs and service dogs for persons with disabilities.