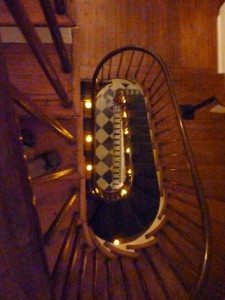 Turn your Tybee Getaway into a Davenport Soiree!  Mermaid Cottages has just the perfect getaway planned so you’ll sail right through Valentine’s Day with the perfect gifts.  It’s a romantic getaway that includes invitations and tickets to an exclusive social event with Savannah’s champions of the preservation movement!

Mermaid Cottages has long supported the birthplace of preservation in  Savannah, GA – the Davenport House Museum. This beautiful, fully restored  1830’s house was saved over 60 years ago by seven ladies in pearls who  literally stopped the bulldozer from tearing this home down. The 2017 Annual Fundraiser is always a terrific Savannah event! This year, every NEW two-night+ reservation made for the weekend of February 17-19, 2017 will receive one ticket  to the Davenport Soiree and TWO additional nights FREE with Mermaid Cottages for that weekend!! …

Turn Your Tybee Getaway Into A Davenport SoireeRead More »

Tybee has plenty of eccentric nicknames and monikers.  The one we hear the most is quirky.  Well, it’s almost time for Halloween, so when quirky meets eerie it can be very spooktacular! This weekend is a perfect example as Bo Bien Hut debuts it’s Rock & Roll Surf Zombie Shark Attack Heart Attack outdoor haunted trail.  It’s going to be another hauntingly family friendly adventure.  It runs October 22-24 and then again October 29-31, from 6-9 p.m. each night.  It’ll be an outrageous and ghastly treat that only cost $5 to enter (kids 5 and under are free!).  All proceeds will benefit our Tybee Maritime Academy, it’ll be worth quite a scare, don’t you think?

Here come goblins and ghouls hoppin’ down the Haunted Hut Trail to a surf-a-go-go theme.  If y’all remember, a hydrogen bomb was ditched in the waters off Tybee back in 1958.  Legend has it that a great white shark bit into the Tybee Bomb as if it were food, making the shark radioactive.  It’s so bombed up with radiation even swimming past it can turn you into a zombie surfer. …

Put that top down and cruise on over to Tybee Island for the 2015 Tybee ICE Run on October 24th.  Simpler times and that small town/hometown feeling takes over as soon as you cross our bridge onto our beautiful and historic island.  Show off your ride and enjoy seeing all the other classic and vintage vehicles as we roll the clock back to when automobiles and their style ruled the road.   Island Car Enthusiasts ~ I.C.E. is a non-profit organization/custom motorsports club out of Wilmington Island GA that is open to everyone regardless of year, make or model.  If you love your ride, two wheels or four, come check them out!

This will be the ICE Car Club’s 7th Annual Charity Hot Rod Show.  Find out how to Purchase Tickets & More Information right online and get ready for some real heavy metal on display on the beach side of Hotel Tybee.  You’ll just enter through the tunnel under the hotel. This year is all about the animals as ICE is raising money for ONE LOVE ANIMAL RESCUE and THE TYBEE SEA TURTLE PROJECT. You cant find a better venue in The Southeast to show off your ride.

While you’re here, enjoy styling in your ride along the beach, meeting other car enthusiasts and drooling over that one special car that brings back old …

“A funny thing happened on Tybee…”  We’ve all got plenty of stories about our adventures at the beach and Tybee tends to be the perfect backdrop for all sorts of hilarity and shenanigans.  Coming soon, we’ll have our own Tybee Comedy Revue and we bet you’ll enjoy the laughter.  The curtain is up and the lights are brightly shining at Tybee Post Theater.  It’s Show Time, y’all.

Tybee Comedy Revue debuts its fantastic night of stand-up comedy starring nationally known comedian and pianist extraordinaire, Jerry Farber. Jerry lives in Atlanta and is one of the city’s most recognized and acclaimed performers, entertaining there and in comedy clubs around the country for over two decades. His style is inspired by both jazz and comedy greats, from Dave Brubeck and Errol Garner to Woody Allen and Mark Russell.

Opening for Jerry is another Atlanta comedy superstar, Kristi Leigh Snyder, a mega watt amalgam of “Carrie Bradshaw-Liz Lemon blend, with a Monica Gellar undertone; a Julia Sugarbaker bouquet on the nose, with a nice Blanche Devereaux finish.”  In other words, she’s a hoot!

We love how Tybee Post Theater has really come into its own.  Y’all know Tybee has it’s own cast of characters just walking around every day and now we have a venue to share some really extra special moments.  Why hide the good stuff.  Let’s put it all up on stage and shine some light on it!  It’s all on their website: … 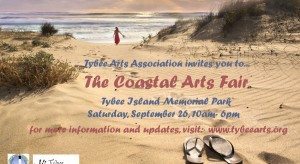 Tybee Island is very well known as a great getaway place, but did you know we’re also renowned for our Tybee’s Arts Community?  Our little barrier island is very well suited as a muse for artists, crafters, musicians, thespians, writers, chefs, singers, photographers, dancers and many other creative types.  Come visit any day of the week and you’ll find any number of artistes creating and performing throughout the island.  In fact, come down this weekend and you’ll be treated to some of our finest arts ever. 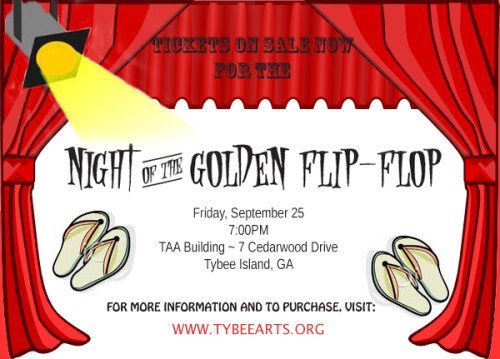 The Night of the Golden Flip Flop is a gala reception and fundraiser on Friday, September 25 from 7-9 p.m., the evening before the Coastal Arts Fair. This festive evening will include a “Sneak Preview” of some of the artwork that will be available during Saturday’s Coastal Arts Fair. …