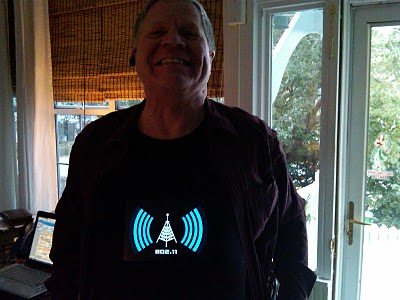 We are so lucky- we have our very own “technology Concierge” , Michael Bodine. He’s like Spiderman- he looks like a normal everyday person, but when we call him- 24/7 to come fix something that needs fixin’ ( a DVD player, the internet connection at your cottage, even that darn Direct TV that never seems to cooperate) Michael jumps into action! Always smiling, never makes you feel dumb, just a great guy to have around.

I have a brand new toy to play with, my very own Netbook which is bigger then a Blackberry, but smaller than a Laptop and oh so great! Michael found one on line on sale, set it up and tah dah! My new netbook has come into my life!

Michael was also so proud of his Christmas present. And only Michael could wear something like this and get away with it! When you walk into a home and are wearing this shirt, whenever you are around wifi, it lights up! Just typing this brings a smile to my face.

Thank you Michael- you are indeed the BEST! 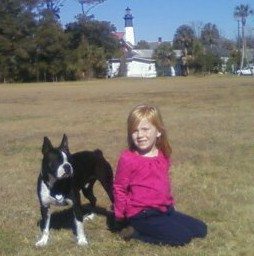 I truly believe that Mermaid Cottages is one of the reasons I’m on this earth. This is my purpose for very many reasons. One of which is to be able to help guests like David and Lily enjoy our island and cottages.. Here is a guest blogger who I’d like you all to meet. In David’s own words….

David Eduardo is a thirtysomething freelance music journalist and bowling alley bartender based in Athens, GA. His daughter Lily, a native Athenian, presently lives 250 miles away in Jesup, GA. The commute has been difficult. In December 2009 David decided that he was spending too much time having conversations with Lily’s reflection in the rearview mirror of their ’99 Honda Civic and not enough defending her youth and imagination and curiosity against a world that looks to take these things from us all too early. So, it was decided, that while Lily still believes in mermaids and buried treasure and the power of fantastic sunsets she should live (at least part time) in a magical place that supports those beliefs. Enter Tybee Island. Many of the their adventures, exploits and lazy afternoons will be shared here on this blog, and ultimately in a novel you’ll be able to find at Chu’s Convenience Store on a rack somewhere between the flip-flops and sunscreen, summer 2011.

Most of you probably subscribe to the notion that the tilt of Earth’s axis coupled with the planet’s elliptical orbit around the sun determine our winter and summer solstices and by extension our seasons and calendars. With all due respect to the creators of the Mayan, Gregorian and racy firefighter fundraising calendars–none of which suggest February 28th as being even close to the first day of spring–y’all must not have been on Tybee Island yesterday.

The front porch of the Dutton-Waller cottage does amazing things for Folgers Classic Roast Instant Coffee Crystals. Sure I could’ve brewed a pot of fresh ground (conventional) coffee in the home’s comfortable kitchen but my five year-old daughter Lily is a high maintenance handful in the a.m. so I’ve learned to save time by forgoing the drip brew. Best to get caffeinated, and on equal energy footing with the child, as quickly as possible.

Before ten o’clock the sun had dismissed the clouds and claimed the sky for itself–it was nearly sixty degrees and a quick stroll down Chatham Avenue to Fisherman’s Walk had us on the inlet river beach building sand castles for the tiny plastic seals and seahorses I found in a Gainesville, Georgia thrift store earlier that week. Sure it was difficult keeping the mote filled using an 11.2 oz Evian bottle, but that damp ring around the tower will definitely discourage uninvited nefarious folk. Lily proclaimed it to be quicksand, and thus, our fort was impregnable.

Naturally, we had to celebrate the spring-like Sunday and the safety of our gently used toy friends with lunch (outside!) at AJ’s Dockside. In the distance Little Tybee begged me and Lily to commandeer a canoe and row over for adventure–an adventure that would have to wait until the (real) spring, or summer. We contemplated this, and a zillion other Tybee-centric vacation goals, over the kids fried shrimp plate and a blackened mahi-mahi po’ boy with potato salad. Culinarily-speaking Lily and I now live in a house divided. I think AJ’s has fantastic fried shrimp. She prefers the butterfly cut version Stingray’s has to offer. The remoulade sauce my sandwich was served with makes for a nice alternative to cocktail or tartar when looking for a condiment to compliment said shrimp. As for Stingray’s, I’ll always love their lobster and crabmeat bisque.

No, I’m not a food critic and you haven’t stumbled upon the new online home for a resurrected Gourmet magazine (RIP)–but I resolve to eat at every restaurant on Tybee Island before the (traditional) calendar expires, and I’m prone to form opinions. And now that I have a forum for random Tybee ramblings maybe the chef at AJ’s will consider replacing that spongy sub roll for a lightly toasted flaky-chewy French baguette to really bring their po’ boy sandwiches to life? As long as they don’t change the perfect potato salad, or the view. 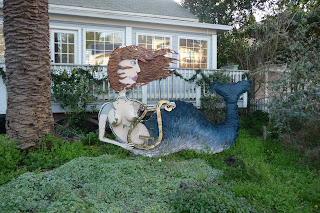 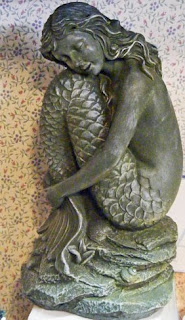 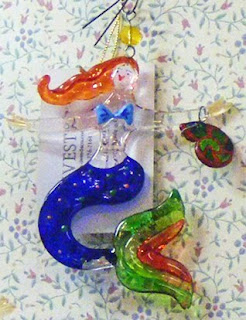 I’ve been missing in action from my blogging the past 10 days or so, sometimes life just gets in the way! Mom’s wonderful visit had come to an end on Tybee and I needed to take her back home. On the first leg of the road trip North, I tripped on an un even sidewalk and fell. All the things in my arms flew everywhere and I literally was on the sidewalk howling in pain. The funniest part of this- a man went jogging by and yells out ” Good morning!”. I looked at him with a crazy look on my face and he just smiled and kept running! Oh well.

Long story short, the trip made a sidebar visit to North Carolina to see a doctor ( thank you Lynda for all your help!) then two days later made it to Delaware to take mom home. Then just with trying to keep up with all the many wonderful inquiries and just handling the business long distance, blogging has not been my number one goal.

However , the Mermaid sightings are rolling in! Thank you to Margo and Melissa for your pictures! Keep sending all the unique and specials ladies you all keep finding around the country.