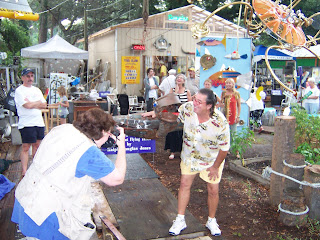 Southern Living Magazine came back to Tybee to shoot some pictures for a travel article on Tybee to be featured next summer. WOW! Watching a true pro work with the shooting of the sights and scenes of the island was great fun! I was lucky enough to “help” Meg McKinney, photographer for the travel section of the magazine and show her all the in’s and out’s of the island. Meg had a very extensive list of what the magazine wanted to feature for the article and shooting “downtown” Tybee was one of the “to do’s”. Walking down the street carrying all the camera equipment, answering questions of the many visitors who wanted to know what was going on , enjoying their reaction when Meg introduced herself as representing Southern Living and seeing Tybee through the eyes of a first time visitor!
People love this magazine and were very excited to know their little beloved Tybee would be featured in a magazine with 13 million subscribers. This is the picture of Meg taking a picture of Ralph Douglas Jones aka “the Tybee Fish Art Guy” and the unveiling of his masterpiece Ralphael the Flying Turtle.
One of our favorite shoots was of Tradewinds Homemade Ice Cream on Tybrisa Street. There are two locations on Tybrisa- the Snack Shack which is Italian Ices and the shop itself across the street with over 18 homemade ( really and truly) flavors! Their logo is “Kone Tiki” ( see above)

More to come on this wonderful little Tybee Treasure in future blogs.

Thank you again Meg and Jennifer of Southern Living! We can’t wait to see the issue next summer!