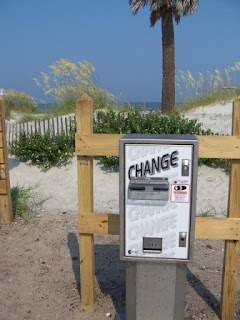 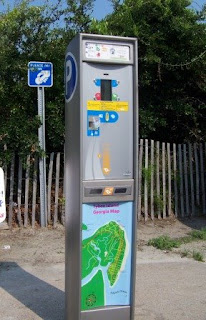 The City of Tybee Island constantly works to balance the needs of visitors and guests, who want to be able to park near the ocean, with the needs of residents and businesses. In an effort to make parking easier for all concerned, the City installed Pay-and-Display parking meters as part of the recent facelift of the South End Business District.

The old, gated parking lots resulted in traffic snarl-ups at several points, including at the entry to each lot as drivers awaited ticket stubs, at the exits as departing drivers paid their fees, and in the streets as people waited for an opportunity to get in when the lots were full. Traffic can now flow unencumbered by parking gates throughout the South End Business District.

The new system allows City resources to be used more efficiently, since Parking Services staff are no longer needed to sit in booths at lot exits. With many transactions taking place on credit or debit cards, and change machines producing bills instead of coins, there are fewer coins used in the new meters, and some of these are used to restock the change machines. As the City pays by the pound to move coins to the bank, there is a further cost reduction. Fewer coins mean less lifting — at about 23 pounds per bag, coin handling can be hard on employees. Bills and credit transactions also lead to less handling of money for the staff, which simplifies auditing the funds.

The Pay-and-Display arrangement is familiar to more and more people around the country, but some have still never run into it before. The DPW has put up many signs indicating “Pay to Park” and a pointer to the nearest Pay-and-Display kiosk to help the uninitiated find their way. Parking costs $1.50 per hour. The Pay-and-Display dispensers accept coins and credit cards. Use of the system is straightforward: select the amount of time you wish to park; input your money or credit card (with a $3 minimum for two hours); push a button to print your receipt; and place the receipt so it is visible on the dashboard of your car.

Visitors can park all day without having to return to their car to feed the meter. The convenience of using a credit card in the system makes it easier for people to make sure they pay for their entire parking stay without leaving time on the meter when they depart. If they decide to move to a different spot or to run an errand elsewhere on the island, the ticket is valid anywhere on the island, even if you park in a spot that still has an old-style parking meter. Overnight visitors can purchase up to three day’s worth of parking at one time, making it unnecessary to deal with meters or payment for multiple visits to the beach.

Experience has shown that dollar bills, particularly in damp and sandy environs like the beach area, have a tendency to clog the bill readers, rendering a dispenser inoperable. To help alleviate this potential problem, only the change machines handle bills, giving change as requested. So even if a change machine is out of order, the parking situation doesn’t escalate out of control as it would if a dispenser kiosk were not working.

Despite the convenience of using credit or debit cards, it quickly became clear that merchants near the ticket dispensers were being overwhelmed with requests for change, so the City installed change machines. Now, merchant reaction ranges from the less enthusiastic, “We still make a lot of change, but the new system has made it more convenient for most people,” to the pleasant surprise of “Gee! I can’t remember the last time I was asked to make change!” Most note that Parking Services staff are very responsive to trouble reports, and City policies are changing to allow more change to be held in the change machines so that each will run out less often.

Some of the merchants are concerned that there are fewer parking spaces in the new configuration. While the overall count of well over 400 spaces in the area is down slightly, some of the spaces have been distributed differently due to the area remodeling project. It is not completely intuitive to many that the old diagonal parking actually was a less efficient use of space than the new, straight-in parking arrangement. While some spaces have been lost on Tybrisa and the Strand, additional spaces have been added in the 14th Street lot and other areas in the district. . The City is also experimenting with two hour and thirty minute limited parking in some of the shopping areas to help the local establishments make sure their customers have a place to park.

Ticket stubs can sometimes blow away or get inadvertently covered, and the proverbial problem of getting a ticket while you go get change or a parking receipt, are all problems easily handled under the Pay and Display system. Parking Services staff can compare the time of a violation to the time of a parking receipt, and if they are a close match, it is a simple matter to void the violation. Simply bring the ticket and stub to City Hall on Butler Avenue.

Parking enforcement is a 365 day a year effort, with parking fees enforced from 8AM until 8PM every day of the week. Parking fines can be paid in-person at City Hall, with a credit card via the telephone, or on-line using a credit card or PayPal account. Annual parking stickers can be obtained at the Tybee Island City Hall, which is free for local residents and a $100 fee for non-residents. The parking sticker provides free parking at any time anywhere on the island. The only real restriction on stickered cars is that loading zone or short term parking time limits will still be enforced.

Visitors or residents finding a problem with a meter, a Pay-and-Display machine or a change dispenser can call City Hall’s Parking Services at (912) 786-4573, x121, to make a report.