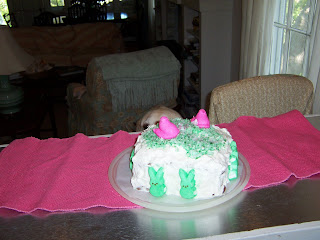 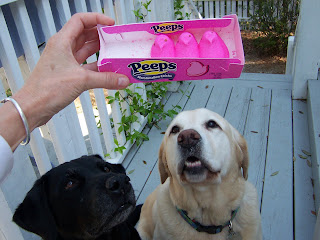 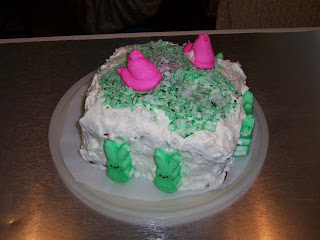 Danny the cupcake eating dog has added new things to be eating that he shouldn’t. On Saturday he screwed up not once but twice!!!!!
He began the day as his lovable self ( and he truly is a loving dog). I had baked one of my sour cream peach pound cakes for the Bark Park Raffle at Seaside Sisters. Was running behind because it’s such a busy Saturday for us and left the cake on the counter to cool. I thought I’d adhered to the 12″ counter rule ( he can’t get his paws past 12 inches on the counter.) but I was off by a few inches. Turned my back to do something else and sure enough that darn dog got up on the counter and within 30 seconds ate half that cake… Even though the raffle was a fundraiser for the dog parks, I didn’t think that even major dog lovers could go for a half eaten cake by a dog.
But Danny’s day wasn’t done yet. I made a gorgeous coconut cake for Easter Brunch and some killer brownies for another Easter gathering ( who knew Easter was such a social event). Since it’s Easter, then Peeps needed to be part of the decoration. I had waited till the last minute to buy my Peeps and only found some green bunnies and pink chicks at Publix– knew I waited too long! Guess who else was buying her Peeps today- Paula Deen and Michael! This is the second time in three years I’ve been buying my Easter candies the exact same time and place as Paula. Two years ago she was buying all her Easter candies at Wal-Mart when I was! She was in her celebrity disguise today, baseball hat and large sun glasses, but Michael was just himself so of course we all recognized her.
Back to Danny- I took Max outside to do his business and Danny wouldn’t go which was unusual. He’d been watching me in the kitchen all evening and sure enough, when I took Max out, Danny got up on the counter and ate several of the Peeps from the box… When I came back inside, he was looking at me with green and pink sugar all over his muzzle… guilty didn’t began to describe the look on his dog face. Or maybe it was just the sugar buzz from eating pure sugar bunnies and chicks.
Then I got on line and my sister had sent me this great photography contest- submit your pictures of your Peeps and places they have gone! I’ m going to send in this picture of Danny and his remaining Peeps friends and tell his story. Danny the Peeps eating dog….
These are pictures of the Coconut Cake with Peeps. If you look carefully at the one picture , you can just see Danny’s face peering up from the floor eyeing those Peeps…. To add to how funny all this is, I just opened my Easter Goodie Box from my sister and the card was this yellow lab dressed like an Easter Bunny talking about eating off the counter! Good job sissie! The other picture shows Danny and Max both eyeing the remaining Peeps in the box.
Check out this fun website on the traveling Peeps and if any of you are traveling with your Peeps this summer, send the pictures to me and we’ll post them. Peeps on the beach, beach staying in a Mermaid Cottage, Peeps going to Seaside Sisters, Peeps buying shrimp…. the possibilities are endless!
http://blogs.nationalgeographic.com/blogs/intelligenttravel/2009/04/peeptastic.html