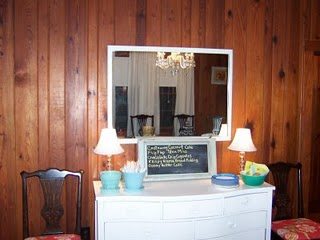 This is the recipe I only make once a year. When served, the guests only take about a tablespoon. Anything more then that is just overkill. I first found the recipe last year while on http://www.pauladeen.com/ and looking for some very festive recipes. This fit the bill 100% because what’s more festive then Krispy Kreme donuts and rum! The recipe is a huge hit, but only if you have about 50 people at the party, if you have less then that, then each of you has to have a bigger portion and that’s just not right! I do make one adjustment to this recipe– for the topping, I only use a little bit of the sugar, only half the butter , but lots of rum. 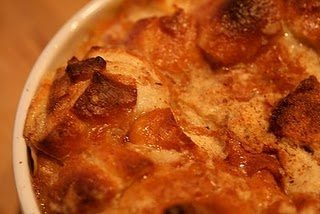 The dish was served at the January Celebration party on Saturday and the entire very large dish was cleaned out! That’s it- enough until this time next year!!! 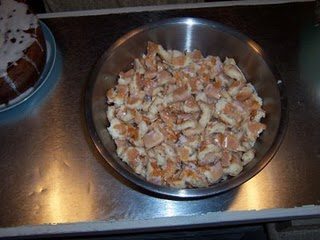 The pictures show the 2 dozen donuts as well as the finished product. We had a chalk board at the cottage telling people what we were serving as well in case they couldn’t tell what all that sugar was. Truly a yummy way to kick off the new year. Now, we’re back to no sugar for a while….
THE RECIPE
2 dozen Krispy Kreme donuts
1 (14-ounce) can sweetened condensed milk (not evaporated)
2 (4.5-ounce) cans fruit cocktail (undrained)
2 eggs, beaten
1 (9-ounce) box raisins
1 pinch salt
1 or 2 teaspoons ground cinnamon
Butter Rum Sauce, recipe follows
Directions
Preheat oven to 350 degrees F.
Cube donuts into a large bowl. Pour other ingredients on top of donuts and let soak for a few minutes. Mix all ingredients together until donuts have soaked up the liquid as much as possible.
Bake for about 1 hour until center has jelled. Top with Butter Rum Sauce.
Butter Rum Sauce:
1 stick butter
1 pound box confectioners’ sugar
Rum, to taste
Melt butter and slowly stir in confectioners’ sugar. Add rum and heat until bubbly. Pour over each serving of Krispy Kreme Bread Pudding. I only used a small amount of the sugar and 1/2 stick of butter and it tasted just fine. 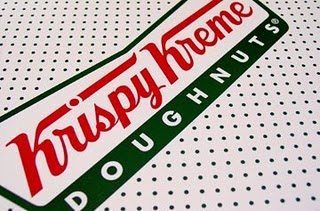 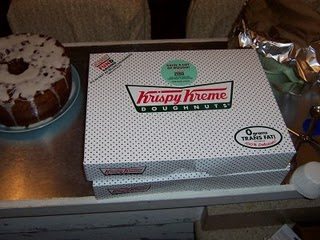