The fabulous note cards from our friend Fifi Flowers have finally arrived on the island! You can get your box of 10 note cards for just $20 at Seaside Sistersnow! These cards are just too cute for words…so here’s a picture to do them justice… 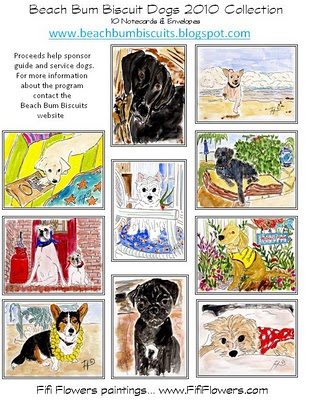 Don’t forget, these cards are fabulous in more than one way! You not only get to enjoy and share Fifi’s whimsical paintings with your friends, you’re helping support our service and guide dog sponsor program! So hurry to Seaside Sisters and pick up your box of pup notes today!

The Tybee Post Theater is definitely a local treasure. If you don’t know about it, let us give you a little background history!

The theater was built in 1930 on Historic Fort Screven by the U.S. Army, and was in use until 1945. It is said to be one of the first theaters in Georgia to show sound pictures, called Talkies. The fort was decommissioned and in 1947, the City of Tybee acquired the property. Private owners continued operation as a movie theater (then known as The Beach Theater) up until the mid 1960s, when it was finally closed for good.

Well thankfully, in 2001, the Tybee Island Historical Society purchased the building, saving it from demolition. The non-profit group Friends of the Tybee Theater acquired the theater in 2006. The restorations began quickly after that in 2007!

The goal of the group is to create a place for the Tybee community that hosts all sorts of events. Banquets, movies, plays…you name it! The Arts are always an important part of a community’s well being. And, of course, that’s usually good for the local economy too!
This October, Tybee Stars FUN-raisers begin all around the island in support of the continued restoration and completion of the Post Theater. These events will run through January and are sure to be loads of fun! Join the community for the first FUN-raiser October 3rd at Marlin Monroe’s Surfside Grill…you won’t want to miss a minute of this one!  Put on your best costume and participate in the Miley and Mullets Contest! If any one has ever mistaken you for Miley or Billy Ray Cyrus, this is the contest for you! The proceeds go to benefit the efforts to restore the historic Post Theater and give the Tybee community the gift of the Arts for years to come. It is fun for a great cause and we can’t wait to see you there!