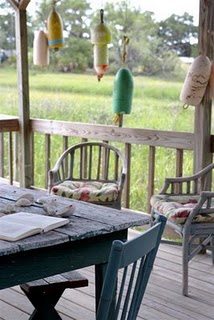 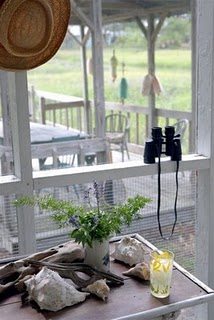 WOW! While going about doing my business yesterday of checking our various cottages before our guests arrived, I went out to the covered dock house at Fiddler on the Creek. The sheer beauty of this little cottage and dock house always stops me in my tracks, no matter how busy the day is. The tide was low, the Fiddler Crabs were out in full force ( hence the name!) , the oysters were clacking ( if you’ve never been quiet enough to hear the clacking of oyster shells at low tide, the sound is a popping sound. You can hear this sound at Tybee Tides, Marsh Mermaid, Doodlebug Cottage and of course Fiddler on the Creek) . I heard a rustle in the marsh grass and then a juvenile great blue heron took off! She was magnificent and made her croaking bird sound as she flew away, obviously upset that that I was enjoying the marsh while she was eating!
The picture above is what I saw and the porch shots are the pictures taken by world class photographer, Richard Leo Johnson during his summer visit of the screened porch and dock house at Fiddler.
Such a gift I was given with seeing this bird yesterday! 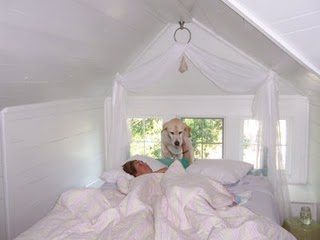 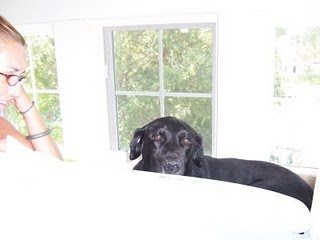 Do any of my regular readers remeber how perfect Mermaid Manor looked for the Tour of Homes in June? Perfection, clean, organized, the toast of the tour? Well, this is the real life version when daughter Katie comes home, the dogs are in bed sleeping with her and life is how it should be, messy, real and honest. Danny is jumping from the window seat onto the bed, Max is happy on the window seat just watching everything. Katie is now back at work in the mountains of North Carolina and the home is back to Tour of Homes perfection, but I do hope she’ll come home again soon! Neatness is over rated when the alternative is having your family back under the same roof. 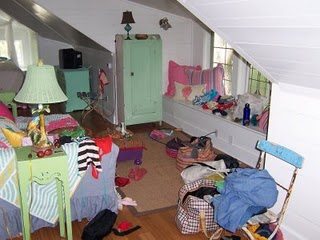 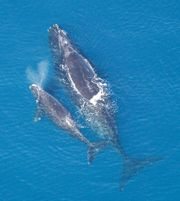 The leading cause of death among North Atlantic right whales, which migrate through some of the world’s busiest shipping lanes whilst journeying off the east coast of the United States and Canada, is injury sustained from being struck by ships. But there is some good news. Here’s a recent article from the Savannah Morning News about a new federal recommendation.

A new federal report recommends that ships entering and exiting the port of Savannah and other ports along the East Coast slow to 10 knots (about 12 mph) to protect highly endangered right whales.
“Our scientific analysis shows that a 10-knot speed limit in critical areas will significantly reduce the threat to these endangered marine mammals,” said retired Navy Vice Admiral Conrad C. Lautenbacher Jr., undersecretary of commerce for oceans and atmosphere and NOAA administrator.
If adopted, the measure is expected to have an impact of $3.6 million a year on commercial shipping in Savannah.
Savannah is just one of 17 East Coast ports from Boston to Port Canaveral, Fla., affected by the suggested restrictions on ship speed. Right whales feed off the coast of New England and give birth off the coasts of north Florida and south Georgia.
In the environmental impact statement issued Monday by the National Oceanic and Atmospheric Administration, Savannah is assigned to the mid-Atlantic region. NOAA suggests the best protection for whales in this area would come from ships 65 feet long or larger slowing to 10 knots within 20 nautical miles of shore for the six months of the year – from Nov. 1 to April 30 – when whales transit the region.
Similar protections would extend along the coast at various times of the year. If implemented, they’re expected to save one or two whales a year from a population of only 300-400.
“If we can save even one or two whales, we can tip the survivability curve to where we can see an increase in the population rather than a decrease,” Lautenbacher said.
Often called urban whales because they live in close proximity to cities along the coast, right whales are mainly threatened by ship strikes and entanglement in fishing gear. They were hunted to near extinction because their slow swimming speed and tendency to float when dead made them the “right” whale to catch.
Ships typically travel at about 15-22 knots in the affected regions, Lautenbacher said. At the reduced speed, whales will be better able to get out of their way and won’t be as likely to be mortally wounded if they are hit.
“It’s a very positive step for the conservation of right whales,” said Reed Bohne, NOAA’s regional director for sanctuary program for the Northeast and Great Lakes Region and former sanctuary manager of Gray’s Reef National Marine Sanctuary.
Monday’s report was more than five years in the making but includes a sunset provision that allows for adjustment in the rule based on new research.
Georgia Ports Authority spokesman Robert Morris said Monday that GPA had not finished reviewing the document, but would likely welcome the sunset clause in part because of technology it’s working on to track whales and warn ships of their presence.
The monitor seeks to record whales as they communicate with each other. The current warning system is based on costly and spotty visual sightings.
“When whales are communicating, the buoy sound systems would pick it up and communicate it to the Coast Guard and ships that whales are in the vicinity,” Morris said. “This is the kind of technology that could change the whole nature of the discussion.”
Tom Wright, a member of the Savannah Maritime Association, has followed the right whale situation closely. He, too, was cheered by the sunset clause. The U.S. is already developing a plan to enhance port and coastline security, he said.
“The same systems that will provide the underwater view will be able to detect right whales and slow down vessels when necessary, rather than arbitrarily during a calendar period,” Wright said.
Such a system could be used to warn all vessels.
“The last right whale ship strike in Georgia waters involved a vessel less than 65 feet in length,” Wright said. “NOAA needs to consider these vessels also. If the sensors were in place, the federal and state governments together could restrict all traffic that threatens the whales when they are detected.”
What’s next?
The final environmental impact statement issued Monday to reduce ship strikes to North Atlantic right whales is one of the last steps in the process to implement a ship strike rule. The public has until Sept. 29 to comment on the statement. The National Oceanic and Atmospheric Administration expects its final rule to be issued by December.
On the Web
The impact statement is available at nmfs.noaa.gov/pr/shipstrike/eis.htm.

Our favorite shop on the island has a very full fall planned of great events! Yes, we are in the state of Georgia and yes, football is a passion here…. so to kick off the fall season, join us for the tailgate party tonight at the shop!
TAILGATE THURSDAY August 28th / 5 til 7 PM Get ready for the DAWG season with the Sisters! Join us for food, fun and all things football! Great new wearables and accessories as well as fabulous items for your own tailgate celebrations! Munchies from Nancy Smith’s cookbook and beer/wine… ….. and don’t forget your Pom Poms! REGISTER FOR A FREE $25 GAS CARD (it’s a LONG walk to Athens!)
And this weekend is no exception either – join us for a weekend long event!
August 30-31 – Weekend Gypsy Tent Sale (All darn day; all darn Labor Day weekend!)Fabulous finds of new, used and somewhere in between artwork, furnishings, housewares, accessories and just plain cool stuff!Guest Gypsies will be onsite – stop by, we promise there will be something for everyone! Peasant skirts and head scarves optional!
Visit the shop’s newly updated website and blog http://www.seasidesisterstybee.com/ for even more details and fun!

Well, I bet this is a conversation most of you don’t have every day. I love talking to our guests, be they future guests or repeat guests coming back to enjoy our island over and over again. I’ve purposely set up my vacation rental business so I have a terrific trio of ladies, Mary Lou, Teresa and Judy who handle all the daily housekeeping and operations ( along with the great help of our handy men David and Chris) and I have Peachy Keen Gary who handles all the book keeping and payment processing. Which allows me to do what I love the most, helping our guests find the perfect cottage and home for their visit. And Blog.

I ‘d been emailing with a very nice lady from Indiana ( we have a tremendous number of visitors from the midwest and we love it!) Kathy wanted to rent a pet friendly cottage with lots of quirky character and as we were discussing the right place, she shared that her pets were two well trained ferrets named Wendel and Bandit. Pets are pets to me and as long as they’re well behaved , I don’t mind any of them. Then Kathy and I started talking some more, seems that she found me when she googled haunted travels in Savannah, GA and Mermaid Cottages popped up as a place for pet friendly accomodations. Seems that Kathy and her husband spend their vacations traveling to places to experience ghosts and haunted places. They have their own website about their work and passion – visit http://www.ourhauntedtravels.com/ Not sure if any of our cottages are haunted, but since they are pet friendly, they fit the bill for Kathy!

Best of all and even better, when Kathy travels, she is happy to share her talent.

In her own words : “let me know please if there is anything haunted in Tybee …. If you know anyone having a problem with a spirit if they are interested we maybe able to help. Our service is free.
thank a lot, Kathy and John Sullivan”

So… Kathy and John will be here this fall and if any of my readers in the Tybee, Savannah area have a need for their free services, just email Kathy thru her website!