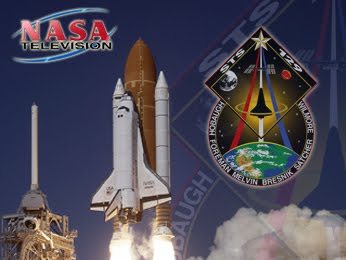 My new favorite reality TV show is not The Real Housewives of Orange County or Dancing with the Stars like many of you probably believe. It’s NASA TV. And there was a live performance and I had front row seats today- even if those seats were actually 400 miles away. 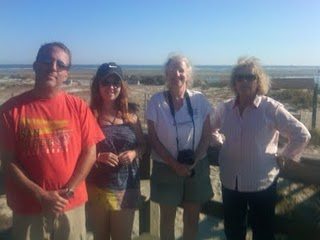 2:28PM was the take off time from Cape Canaveral and I headed down on my trusty beach bike to the south end of the island to watch the show. What fun- a beautiful day today- warm and sunny and there at the south end was Stephen Palmer from Tybee Island Wedding, Jan Elliott- realtor on Tybee and Fran who rents Doodlebug Cottage from us every fall and winter. Steve had the NASA app on his Iphone ( isn’t technology amazing) and precisely at take off, we saw the plum of smoke and then the trail of smoke as the Shuttle took off and headed to space. We were all just awe struck! Not as incredible as the evening launch, but still pretty spectacular. 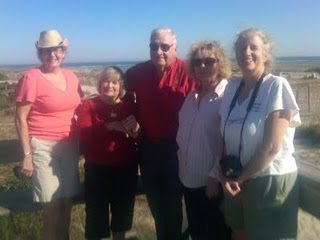 We saw a couple walking on the board walk, and we assumed they were there to watch the launch. But it was just two Savannah locals out enjoying the day. I realized it was Sonny Seiler – local celebrity, owner of UGA the Bulldog and the lawyer for Jim Williams of Midnight in the Garden of Good and Evil Fame. We spoke, we all posed for pictures and then we all commented on how beautiful the day was. Just another day in paradise!