Tybee recently lost one of our Tybee Citizens. Eddie Crone was someone who loved Tybee. He loved living here, he loved being part of the community and he cared about keeping Tybee the unique and special place it’s always been. While I may not have supported him as a political candiate, I always admired him for speaking his mind, no matter where the chips fell. And all of us on the island, no matter if he was our candiate ornot, loved seeing the bigger then life size “waving Eddie” come election time. Waving Eddie appeared all over the island.

This is the obituary that appeared recently in the Savannah paper. Donataions in his memorary can be made to the Tybee Island American Legion ( call them @ 912 786 5356. Thank you Eddie for your years of service and for caring about the island and her people. We honor your memorary.

“As a Tybee Island City Councilman, Ralph “Eddie” Crone was known to walk out of a meeting in sheer disgust when proceedings rubbed against his no-nonsense style.

But he was also a tireless champion of the island, its people and its history. On Friday, that’s what friends and fellow islanders remembered most as they mourned him.

“He had a big heart, which I don’t think a lot of people saw,” Mayor Jason Buelterman said. “He got a lot accomplished for Tybee, and he’ll be sorely missed.”

Crone served three terms on council from 2003 to 2009 and also headed the council’s infrastructure committee. His most enduring contribution may be one of historical preservation.

Cullen Chambers, executive director of the Tybee Island Historical Society, said the restoration of the 1906 Fort Screven Guard House wouldn’t have happened without Crone’s involvement.
Every morning without fail Mr. Crone was down there checking on the progress of that project,” Chambers said. “It wasn’t just about the history. It had a lot of personal value to people in the community. Eddie more than anyone recognized that.”

Like the Guard House, Chambers said, Crone was unpretentious, solid and reliable.

“He is the last of a breed,” Chambers said. “You got the real deal with Eddie Crone.”

Tybee Councilman Paul Young was elected the same year as Crone, but his environmental activism put him at the opposite end of the spectrum of Crone’s strong personal property rights position. Despite their differing philosophies, Crone often gave his unused travel and training budget funds to Wolff. In 2008, it was Crone’s $1,000 that allowed Wolff to attend training with the Institute for Georgia Environmental Leadership, and last year, Crone passed along $600 so Wolff could represent Tybee as a member of the International Council for Local Environmental Initiatives.

“Some of the things that really helped us move forward as an island are due to his generosity,” Wolff said.

Day in and day out, most on the island didn’t know Crone as a politician. They knew him as the morning cashier behind the counter at Chu’s on U.S. 80. While he may have reveled in presenting himself as cantankerous and opinionated, many found a generous, fun-loving side, too.
Lisa Butler knew Crone for almost 40 years, and in the past nine worked with him at Chu’s, where she is the manager. As a retired shipping industry manager, Crone didn’t need to work, she said, but he opened without fail.

“This man worked seven days a week and opened the store every day for nine years,” she said.

“The man is truly an icon of Tybee,” she said. “He’s going to be very missed.” 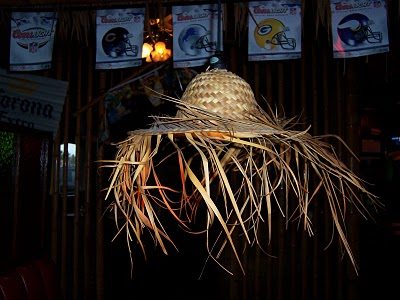 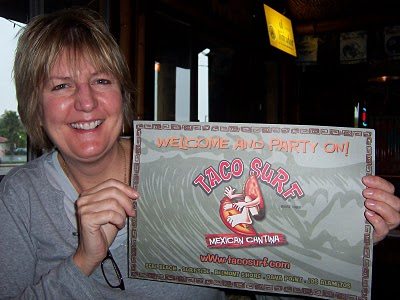 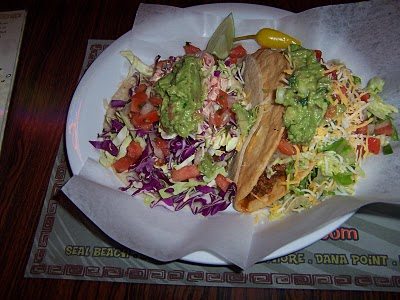 Everytime we head to the West Coast and Southern Cal, we make a beeline to Taco Surf. The best fish tacos anywhere and I am a collector of Fish Tacos. The blend of flavors, the fresh fish- all adds up to a mix of tastes that I adore! The decor of Taco Surf is upscale surfer dude- well not exactly upscale surfer dude- but just plain old surfer dude!! Thank you Taco Surf 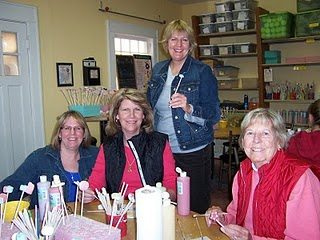 The 1st stop as we cross the country on the way to Georgia is Tucson, AZ to see my nephew Ryan who is a freshman @ University of Arizona. In addition to spending time with him and give him a hug and telling him how much we love him and cherish him, we also had the chance to go to Ben’s Bells and voluteer some of our time. 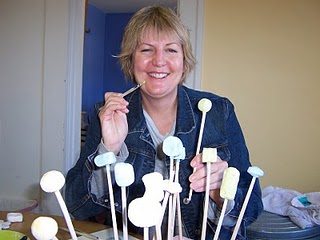 This is the most amazing organization and I have really been impacted by their mission. Ben’s Bells started when Jeannette and Dean Packard lost their son Ben just before his 3rd birthday. 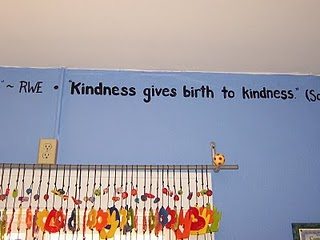 They experienced so many acts of kindness by strangers and friends that they created Ben’s Bells which is a community art project to demonstrate and encourage kindness. 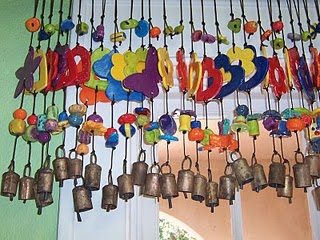 Each bell is made by hand – they are really like windchimes and include clay beads and metals tinkling bells. The clay components are kiln fired and then the Bells are assembled. 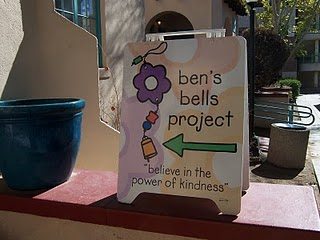 100’s and 100’s of these bells are made every year. Volunteers can just walk into the Ben’s Bells studio and help cutting out the clay components, painting and assembling the bells. Then twice a year, the assembled bells are hung randomly throughout the Tucson community and beyond for people to find and take home so they can then pass them on to someone as an act of kindness.

As the Ben’s Bells project says, “The Ben’s Bells Project empowers each of us in creating community, inspiring hope, and spreading joy – simply by being kind.”

We had a wonderful time volunteering at such a wonderful organization and spending time being part of a “community”.

How delicious does this pie look! And notice the beautiful flowers!

Jan is one of our very talented mermaids. Not only is she a great housekeeper, but she takes her work very personal and treats the cottages like they were her own beach cottage. She’s also a super cook and chef! She’d emailed me this story about the Lemon’s from Tybee and I received her permission to post the story and recipe. If you’re lucky enough to stay @ Mermories on the Beach, then you’ll have these fabulous lemons right outside your front door of the cottage!

“Tybee Island is known for many wonderful things – our beautiful beaches, cottages and community among many other joys. This year I came to know another bounty of our island – incredible fruit! I am originally from the suburburbs of Atlanta and I know that the only fresh fruit I had ever picked was scopenongs from my backyard – however this year on Tybee I have once again fallen in love with a Meyer. No, not my husband Bobby Meyer – but a lemon named Meyer. I had heard about Meyer lemons, even had a taste from my neighbor (ok – she gave me two slices) – however not until this season did I realize the flavor of these lemons and other citrus grown in Tybee yards! “Memories” one of Mermaid’s recent additions is just down the street from my house. I have never seen as many lemons on a tree – big and beautiful lemons – Meyer lemons are actually a hybrid of a lemon/orange – and the juiciest lemons I have ever tasted, I have never been “excited” about a lemon before – but when you juice one of these – ya get over a half a cup of lemon juice! I’m a good cook – never been known as a baker and I want to share this recipe for a Meyer Lemon Creme Pie – straght from Paula Deen.’

Place Meringue topping and use spoon to make pretty flips in meringue!

This is best when chilled and set – but my Meyer could not wait and it was still tasty a lil warm! 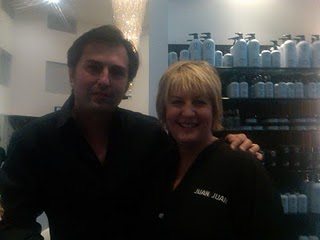 A few years ago I was introduced to one of the best hair salons in the country from my friend Cindy. Juan Juan Salon Sean and Ellie are a brother/ sister combo who are truly the stylist and colorist to the stars. And a few ordinary people like myself! 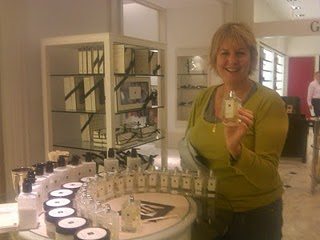 They always make me feel so incredibly welcome and not at all like a duck out of water. I’ve over heard some pretty fascinating conversations while sitting waiting for my highlights to set from the powerful hollywood executives that also frequent the salon. We’re all there for the same reason, to have our color look sunkissed and natural and have our cut be one we can re create when we get home- which thanks to Sean’s mastery, I’m indeed able to do. I also have my eyebrows done by Stephanie G- she is an eyebrow and makeup specialist. For those of you who have never had your eyebrows done professionally- the difference it makes in your appearance is eye opening ( excuse the pun!) In fact, Stephanie is going to be an occassional guest blogger giving us normal folks some make up tips we all can use. She’ll start this very soon- so check back with us! 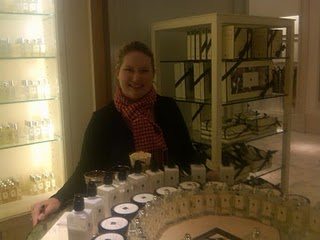 After I finished, I walked across the street to Saks Fifth Avenue so see if they carried Jo Malone. For those of you who read this blog regularly, you might remeber my blogging about how much I not only love the fragrences, but love the packaging! It’s half the fun! The wonderful lady who helped me is also a fellow blogger ( I tell you, I love discovering those of you out there who blog – you keep appearing in the most fun places!) Kate is also going to be a guest blogger- so be on the look out for her blog posts on tips on fragernce and maybe some occassional food/ recipe ideas / tips!