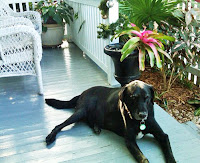 I’m spending a little time in sunny Key West, Florida this month! Of course, Max and Danny made the trip with me, and we are having a blast. As you can see, Max took no time at all to adopt the Key West attitude. He hit the porch and quickly relaxed! Jimmy Buffet would be proud, huh? 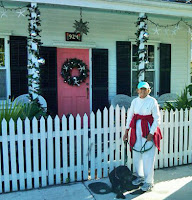 My mom and a few others have joined us and, between us all, we have really put the dogs through their paces strolling Duvall Street. It’s really been great seeing all the beautiful, unique Christmas decorations here! But, I think Max and Danny have had enough sight-seeing for a day or two…it’s nap time now! 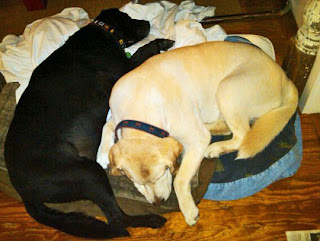 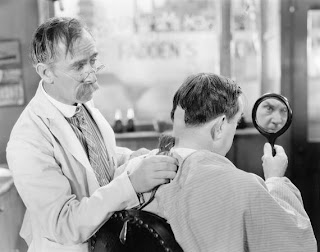 Ever had Bubble Gum get stuck in your hair?  Ever tried to cut it out with scissors only to find that you made matters worse? Ever had Bubble Gum in your hair figuratively? Recently, I was in the middle of some important work and got stuck on a problem. Okay.  I got hung up on something someone said that was unkind and unwarranted.  It was a mean thing for the other person to have said and I had nominated myself as The Avenger!  Somebody was about to tote a butt whoopin’.  I couldn’t see my way through to a resolution, so I did what I usually do when I’m frustrated…I turned on the TV and searched for a movie to take my mind off the issue. It was my way of counting to 10 before I opened a can of Whoop Asstigator.. 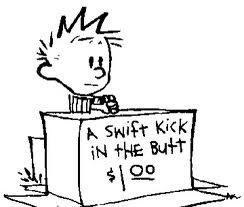 What do you know? One of my favorite films, based on one of my favorite books, with several of my favorite actors was on, The Divine Secrets of the Ya Ya Sisterhood. How convenient!
Yes, I know it’s a chick flick. Yes, I know it’s a story about the relationships of women. Yes, I know it’s an extreme exaggeration of people from the South…strike that.  It’s actually pretty spot on as far as portraying the workings and dynamics of the lives of southern women and men I grew up around.  It’s how we roll.  We chew on something that’s bothering us until we chew all the taste out of it, and then we stick it in our hair like a wad of bubble gum, just for spite.  We are passive-aggressive and speak in riddles so syrupy sweet that you don’t always realize you’ve been insulted or transgressed against until long after the encounter. Sometimes, we even shoot ourselves in the foot, though we know we’ll be limping for a while.  And, don’t even talk about letting it go once we get it stuck in our craw!

Now, I was watching the antics of the Ya-Yas, laughing at the stereotypes as was intended, and enjoying it immensely…even though I’ve read the book and seen the movie many, many times.  That is, until I heard Vivianne tell Sita Lee about how she may have blown things out of proportion. That she may have held grudges rather than granting forgiveness…more than once.  This was supposed to be funny.  This was supposed to be a diversion to help me get my mind off of a problem. After all, I am a Southerner.  Never worry about anything today when you can always make someone else miserable about it tomorrow, right? Hmmm.  Ahhhh.  Ohhhh. Oops.
Tis the season…I’m supposed to be thinking of others.  It’s that time of year when I should be thankful for all that I have, not fretting about what I don’t.  It’s also supposed to be about loving others and forgiving those who might have licked the red off my apple at some point.  It’s about giving. And letting go. 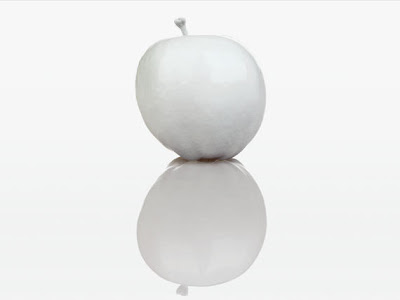 Don’t you hate it when you realize the answer to a situation is something you already know? Especially when it requires you to be the bigger person and let it go when someone else has besmurched you?  Don’t you hate it when you’ve lived long enough to understand that you need to think about the consequences of your actions and restrain yourself from talking ugly and saying mean things? Even when you think you’re justified in trying to make the other person feel as bad as they made you feel?  Even after they’ve been all up in your Kool-Aid without knowing what flavor it is? (For those of you who don’t speak fluent Southern…that means for one to be all up in another’s business instead of tending to one’s own short comings.)

I got my answer in the form of an email from Barb Ogden, one of the super-fantastic Mermaids on the Mermaid Cottages Guest Services Team. Barb shared this photo she took of Horace and Scruffy last summer.  Horace and Scruffy are two feral cats that roam Tybee Island and Barb grants them sanctuary when they need it.  To some, they may just seem like two old alley cats that are good for nothing.  To Barb, they’re two souls that sometimes need a bite to eat, water to drink, and somewhere to nap to get away from the stresses of life. To Barb, they just need something good to happen to them even though they can’t return the favor.
If you’ve got a burden that’s on your mind, or if there’s someone you’d like to put a hurtin’ on, channel your frustration into something that will do someone good. Give Scruffy and Horace their day in the sun and vote for them as the December Pets of the Month over at The Tybee Breeze website! It isn’t silly. It just might be the best gift you give yourself this season. The gift of letting a transgression go, real or imagined, and doing something for someone. Or two old alley cats you don’t even know.
It’s just that simple. Tis the season…it’s within your power to forgive. It’s within you to help when there’s a need. It’s a good deed that will come back to you ten fold somewhere down the road.  It’s part of your journey. It’s Cottage Cheese!