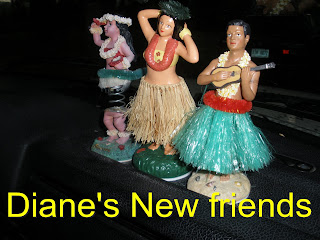 My darling daughter, Katie, is off on her summer vacation. This means driving up and down the Eastern Seaboard visiting grandparents, little brothers, family and friends. She drives a hand me down Volvo ( which she adores) but there is no air bags or AC. I couldn’t let her drive such a car for thousands of miles, so she took my beloved Honda CRV and off she went. Which left me driving her very first car, the 25 year old Volvo station wagon with almost 150,000 miles AND no AC. But in this summer of high gas prices, I’m riding my bike as often as possible on Tybee and bundling my trips off island to conserve gas. So what the heck. That’s what you do for your kids.

The first weekend of driving Katie’s car, I knew we needed to take care of a few things. The first task was to fix her dashboard hula girl from Hawaii- KiKi. This poor girl was 8 years old and had lost her hula skirt from dancing too much. All that shaking had worn off the raffa skirt….. I didn’t know quite what to do, but believe it or not, the answer appeared after enjoying a mojito down by the shrimp boats while my friend Karyn was here visiting from Miami . The North Island Surf and Kayak shop is located right beside Dewey’s where we were having drinks. There on the shop counter were real live, honest to goodness hula dancing people direct from Hawaii ready to dance, shimmy and shake. I decided that if she was in a group of dancing people, no one would really notice her lack of a skirt! So DeeDee and Jeff joined the dashboard dance team and off we went. Jeff is named after Jeffrey Bundy Wahl of Miami who can teach all of us a thing or two about living life to the fullest, even if it means you’re stuck in an un Air conditioned 25 year old volvo playing a ukulele!