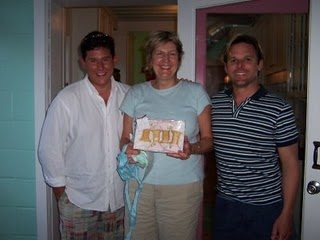 We just love Paul. Paul first found our cottages a few years ago and comes to visit as often as he can ( which is not often enough in our books!) Paul is the type of guest who not only tells the world about how much he loves Tybee and the cottages, but brings guests to visit and even brings US gifts!!! This is a picture of Paul and friends visiting Mary Kay Andrews at her just completely Breeze Inn Cottage http://www.breezeinncottage.com/ which is soon to be a Mermaid Cottage and available to rent for your own vacation. This is also a picture of the wonderful gift Paul brought my dogs! Homemade dog biscuits shaped like Margaritas- very yummy looking and based on how fast the dogs ate them delicious! 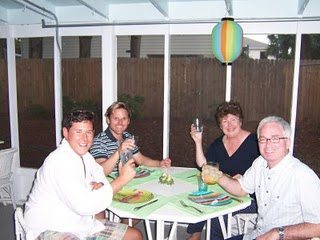 The best part of Paul’s visit is that it’s never dull. Paul had not one but THREE Celebrity sightings while on Tybee and Savannah. Not only did he come over for drinks with his very favorite southern writer- Mary Kay, but also saw Sandra Bullock at AJ’s Dockside restaurant ( the same place I saw John Mellancamp a week earlier) and yes- Paul also saw Miss Paula Deen! But here’s the story Paul told me which reinforces that Paul’s visits are never ever dull.
Paul brought down two co workers with him on this last visit. The home they selected had a hot tub on the back deck. The two young ladies were on Tybee to “partee“. They arrived at the home earlier then Paul and called to tell him they were sitting by the pool and hot tub enjoying some adult beverages. Paul had just arrived at the home when they called and couldn’t figure out exactly what they meant since there was NOT a pool at this home and they were not at the home. He called the girls again on their cell phone and he could tell by the way they answered the phone that they were having a big time. When he asked them where they are and again they said they were sitting by the pool, he happened to look outside at the home next door and sure enough there were the girls , sitting by the pool, drinking margaritas– topless! Paul drops the phone and runs outside yelling at the girls they were at the WRONG HOUSE and to please get dressed and get over here. Just then the owner pulls up to the home ( and this is a very, very nice home) sees this man running towards her back yard, sees these two girls topless and drinking by her pool and starts to “freak out”! English is not her first language and she couldn’t quite understand Paul’s explanation that this was just an innocent mistake and she proceeds to call 911 screamed that there are some crazy strangers naked at her pool!
Tybee’s finest pull up in police cars lights flashing, talk to Paul, get the whole story, snicker at the story, try and explain to the owner this is just fine and matter closed. No one goes to jail for indecent exposure, owner still isn’t quite clear about what happened , Paul and the girls go back to the correct Mermaid Cottage. Life is good again!
Paul, come visit again! It’s too dull without you!!!