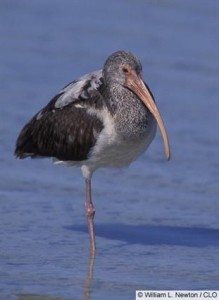 I know these wonderfully unique birds have been to Tybee Island before in the winter, but for whatever reason I’ve never noticed or seen them before.  I’ve seen them in Florida but not on my street!   I love how they look, love how they walk around in little pods looking for food, love the fact that our winter island is such a great place to bird watch!  Sophie and Danny love to look at them but don’t bark like they do when dogs or cats or the occasional racoon walks by.   They also love to watch pelicans, green herons and sea gulls fly over head.

After reading about these birds, I realize that they are also part of Egyptian lore which is why I thought they were familiar.  I was lucky enough to travel to Egypt and Jordan with Marriott and loved the museums and all the stories.  So the fact that these very cool birds are visiting Tybee makes this even more special.

Here is some info on these birds  apparently there is a plural that I need to start using! This info is from the www.animalplanet.com  :

Ibis, a heronlike wading bird. Ibises inhabit warm regions around the world, some of them visiting colder latitudes in summer. They range in length from about 20 to 30 inches (50 to 75 cm). Some are white, with colored heads, legs, and tails; others have variously colored plumage. Their necks, legs, and down-curving bills are long, their tails short.

Ibises feed in mud and shallow water on small animals. They build nests of sticks on the ground or in trees or bushes. The female lays three to five greenish or bluish eggs, sometimes spotted with brown. Both parents tend the eggs and young.

The sacred ibis is a large white bird with black head, tail, and legs. It is found in Africa south of the Sahara. It was sacred to the ancient Egyptians, but is no longer found in Egypt. The glossy ibis is widely distributed, being found in Florida, the West Indies, Europe, southern Asia, Australia, and Africa. The white-faced ibis and the white ibis are found only in the Americas. The scarlet ibis, closely related to the white ibis, is native to South America, where it is hunted for its bright plumage and as food. In the early 1960’s, the scarlet ibis was introduced into the United States. “