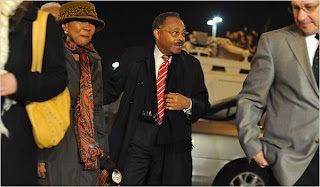 I usually reserve try and blog about my adventures and life on Tybee. Sometimes things are so funny, un believable or just worth noting that don’t happen on our island that I have to comment! Even though this is not the Huffington Post or the O’Reilly Factor, I am a political junkie and since this is my blog, am allowed to observe! The drama behind the replacement of the Junior Senator’s Seat from Illinois is just too much fun to watch.
Doesn’t matter where you sit on this story, the man who has been appointed by the “Governor” of Illinois is an American we all can’t help but to love. Here is what happened today as it was reported by every major news organization in the country.

You go Roland Burris! You are 71 years old and we’ll continue to watch and see what happens when you report to work on Tuesday like you have for years, ready to work hard and serve your country!