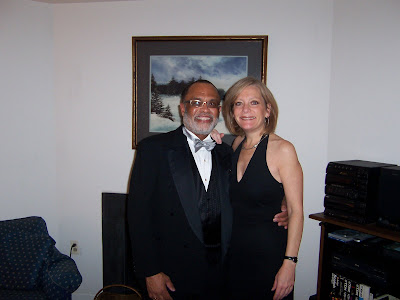 Last night I drove Bud and Donna to the Indiana Ball. I myself have a big date with my buddies at MSNBC- Chris and Keith to start things out! I did tell Bud, who’s a very big deal in his home state of Indiana to tell John and Elaine Mellancamp I said hello and that he represented Tybee very well yesterday!
I had an experience heading back home that sums up the change in our country- at least for this week… Donna lives in the Capital Hill area which is still a neighborhood in transition. I got turned around driving back to the townhouse and saw a woman at a bus stop and pulled over and asked her for directions to Florida Ave. She gave me great directions and then told me welcome to DC. I realized how cold it must be waiting for a bus and I could tell she’d been working all day. I asked her if I could drop her off somewhere vs waiting for the bus. She paused for a second then said- Sure why not!
We started talking on the way to her home in Southeast DC . She had just finished working at her job with a catering company here in DC and she told me how she just kept tearing up during the party because she was just so proud of what was happening in the country. She said her parents never believed this would happen in their lifetime. Then she said, “and you know, I never would have gotten in a car with a complete stranger and I bet you never would have offer ed a black stranger in downtown DC a ride home either”. We both started laughing and she hugged me when she got out of the car and said “God Bless America. We live in the greatest country in the world and we’re living up to our potential.” I was part of a feeling today that I experienced in downtown Atlanta during the 1996 Olympics where everyone thought the best of each other and truly felt like a global community. It’s a high and is the reason why we all in DC are walking around like giddy kids!
Enough for now, I’m heading to the Mall to say “I was there” to anyone who asks where I was when History was made in our Country. 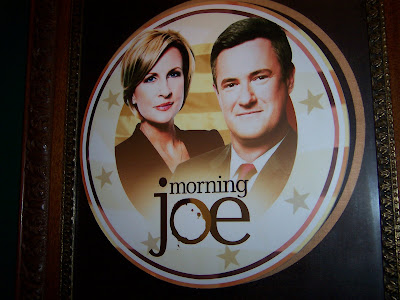 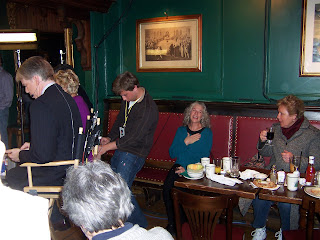 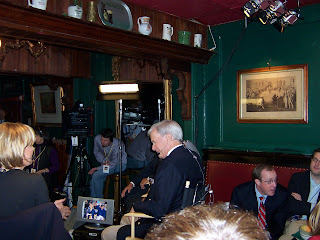 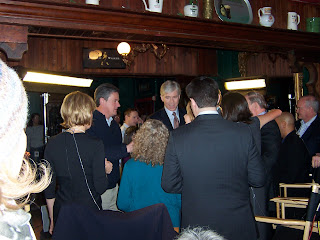 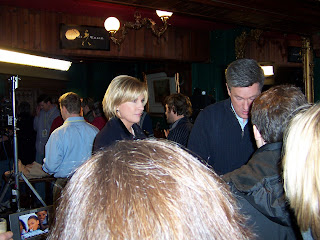 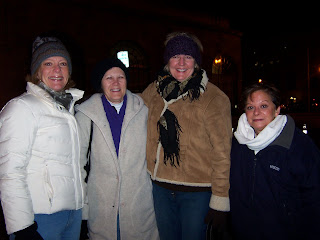 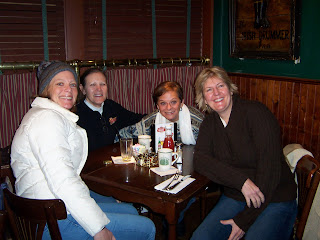 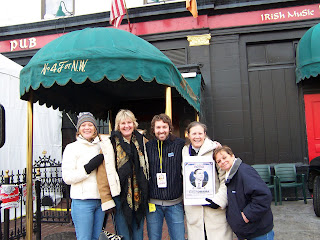 Ok we did it. And those of you who read my blog last night were up and watched Morning Joe at MSNBC starting at 6AM know we did it! I found 3 other friends who are much a political junkie as I am. What fun!! We were up and waiting for Pam and Sydney to pick us up at 6AM to get to the Dubliner by 6:15AM. After all, we figured how big a crowd could there be at that time. Surely no one else really watches the show to know their plans. WRONG. What I came to realize this morning is for so many of us, this is our SuperBowl. We’re like middle aged men who can’t wait for football season and the chance to go to the big game! All the other political junkies like us were in the line which stretched for about two blocks, it was very cold with light snow… and we were dressed for TV, not for the winter. So we waited and waited…. then Willie came out to work the line, he posed for pictures and was just like he is on TV- cute and good humored! We slowly moved up and finally made it to the tent area. We saw Willie go back into the Dubliner at a door right by us and Sydney decides to follow. 2 seconds later, she comes out and motions us all to come in. We’re right in the area where they are shooting the show!
So, we wiggle into a spot directly behind Joe and stand there for 2 1/2 hours! I know alot of you saw Donna in the white coat- thank you Susan for telling me to move her to the side! We watched, we cheered with each new favorite who walked in and was on the show. We stood over two ladies from Atlanta who were eating breakfast ( and as they said, kept stretching it out for 2 hours so they didn’t have to give up their seat.) We didn’t get autographs, but we did get Morning Joe buttons and posters! We saw Tom Brokaw, David Gregory, Tina Brown, Mike Barnacle, Pat Buchannan, Wycliff Jean, the Governor of MA, Peggy Noonan ( who kept turned around and saying to the us- “isn’t this festive!”), we even spotted Carole King the singer in the crowd- waved and said hello- then Mika and Joe spotted her and brought her on the show! So Carole can thank us for letting them know she was there. Mika asked her to come back tomorrow since she was staying right there at the connected hotel!
What was so great was everyone who was on the show recognized how special this time is for our country. This is not just another political event. This is transforming our country and even the world. They all had big grins on their face and kept signing autographs, posing for pictures and were in great humor! We did go over to David Gregory and tell him what a great job he was doing on Meet the Press. He genuinely thanked us and thanked us for taking the time to tell him so. He knows this is his show to take care of and love and accepts the responsibility with great respect.
Then when everything was over and done and the crowds left, we sat down and had a super Irish breakfast! On the way out, we ran into the executive producer and assistant producer of Morning Joe , told him what a great job they’d been doing and they then posed with us in front of the Dubliner! All of this and it wasn’t even 10AM yet!
Yes, for those of you with eagle eyes, we were also on The Today Show when Meredith and Matt showed acouple of shots of Joe and Mika and we were yet again in the background.
We can’t do the Tuesday show, but we sure are going to be up at 6AM to watch and see who’s in our spot this time! Joe did tell the crowd to come on back on Tuesday, but we’ll leave that to another group of hearty souls! 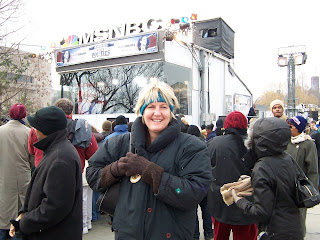 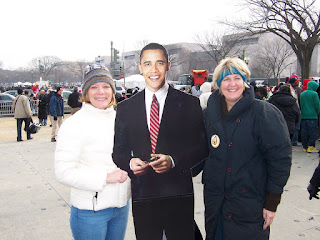 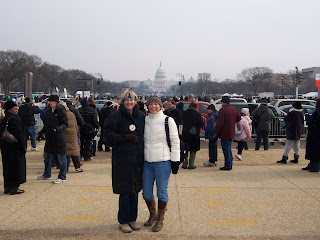 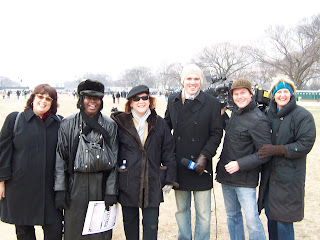 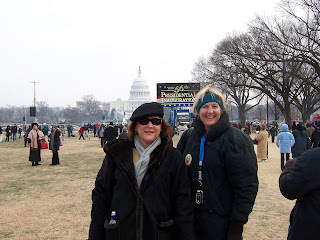 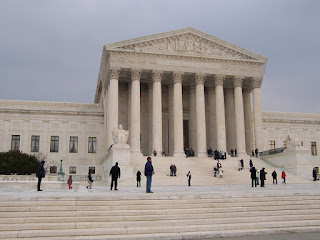 As one of my favorite people, Tim Russert always said, “What a Country”. The Mall today was a giant block party, the country’s largest state fair, the 4th of July parade that makes us all cry…. something is in the air… we’re yearning for something that maybe we can’t quite put our fingers on it, but we don’t want it to go away. We and we’re talking thousands of people- just wandered around smiling at each other, laughing just because we all feel so good, buying everything out there that says Obama or 1-20-2009 or something to help us remember today. The media was EVERYWHERE! I finally found my friends from Miami who are as giddy as the rest of us and as we’re walking the Mall, two very cute, very young men with mics and a TV camera came up to us and asked if they could interview us! Turns out they were from Australia- one of the big news stations from Sydney and they wanted to know why we were here and what all this means to us. Then they were delighted to pose with us for pictures!
We also walked down to the Supreme Court and the Library of Congress- look how beautiful and majestic both these buildings are! 12 hours and counting till we head back to the mall and our day of history! Such a beautiful day to be outside with our fellow Americans!