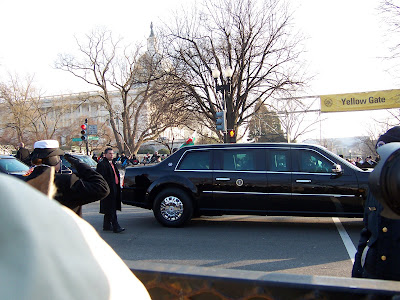 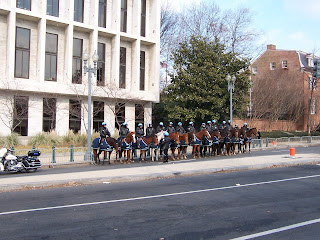 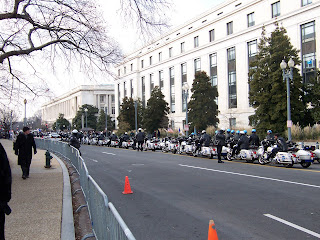 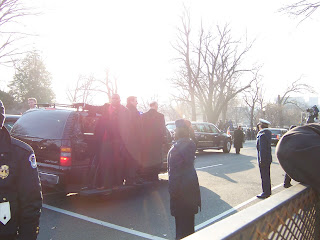 I just couldn’t leave. Despite the fact that I was shivering from being outside for so many hours in bone chilling cold, I just couldn’t go inside. The energy and happiness and joy was just too intoxicating to leave! Plus the crowds were still just so immense that I was sorta sweep along with the masses.
I walked around the back part of the Capital and somehow found myself inside the area where once you exit, you can’t re enter. As I kept walking, I found myself at the staging ground for the start of the parade. All the Capital Police, the Miltary Bands and the Honor guards were all by the Capital, waiting for the President to start the parade and then lead down to the official start of the parade a few blocks away.
We waited, not realizing that the parade was delayed because of Senator Kennedy collapse at the luncheon, but we kept waiting. And waiting. Then the sirens started, the motorcyles started up, and then the Military bands started up ( the President had already reviewed them). Then the press on huge flat bed trucks came next and then the Secret Service and the Presidential Motorcade started rolling by us very, very slowly…. and then we saw the family and they were waving to us and smiling to us and yes- happy to be there! We cheered him not just like a rock star, but as our new leader and our president and one we were so very, very proud of. The crowds kept following the motorcade down the street, cheering, shouting and crying. So much so, that poor Joe Biden ‘s motorcade didn’t have a soul cheering him! I stopped following the motorcade and was completely by myself waving and cheering for Joe and Jill! I wasn’t 100% sure that the President actually waved to me, but I am 1000% sure that Joe did wave to me because no one else was around!!!
I’m leaving the city tommorrow, time to go back home to my own community and try and find ways to help our community , state and country to be the best we can be. 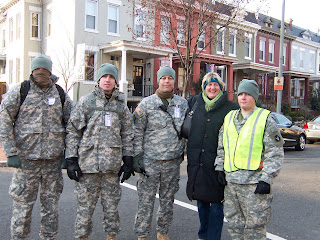 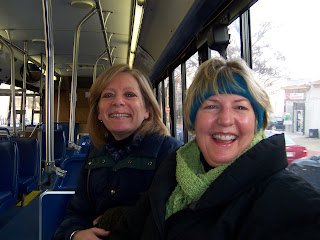 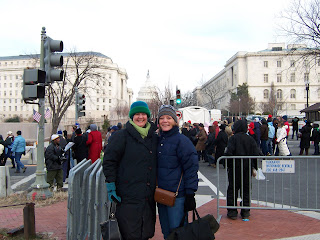 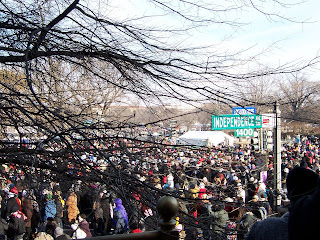 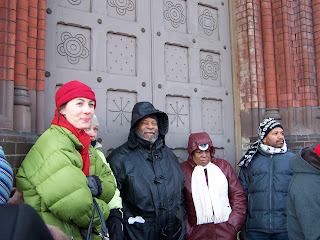 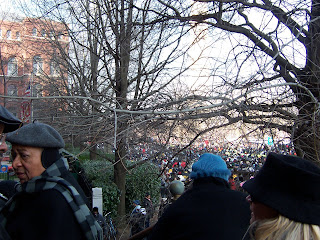 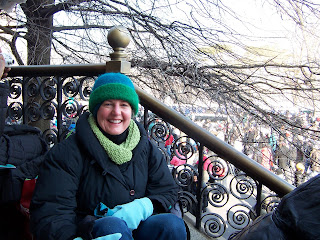 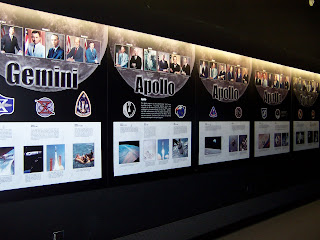 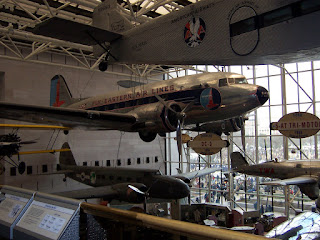 Today was part Woodstock and part Religious Pilgrimage. A day so full of Hope that people from all over the world felt our happiness and wanted to share in the joy. We cheered our new president and said goodbye to the old one. I saw the former president’s helicopter fly over the Mall on his way to Andrews Air Force Base. I can’t begin to imagine what he thought when he saw the millions of people who came out to celebrate the newest chapter of our Country.
The day began riding the bus down the street as far as we could go towards the Mall. We first posed with the young soldiers here from Iowa helping with security all over the streets. Bundled up against the cold, layers and layers to try and keep warm. The Mall was going to be out of the question to watch the swearing in- the mall was already full at 5AM and we didn’t leave the house until 8:30AM. I left Donna and Bud off at the Capital ( they had excellent seats towards the front) and I just kept walking and walking heading towards the Washington Monument. You literally were just swept along with the thousands and thousands of people, most of which did not have tickets, but were just there to hopefully hear , but mostly just to be there. I finally realized I wasn’t going to get on the mall at all, so I stopped at 14th and Independence and walked up a staircase of one of the Smithsonian buildings. The mall was two blocks away and you could hear the Jumbotrons even if you couldn’t see the events. My little group of strangers who were also on the steps became my little parade group family. Young and Old, Black and White, Americans and people from other countries. We all huddled together staying warm, sharing stories on why and how we were here, even being interviewed by two different people who were shooting documentaries of the day.
We couldn’t hear very well, but we could see the mall and hear the cheers and knew what was happening and when. When the swearing in was finished, the cheers erupted all over. Our little group hugged and cried, some thanked God, some just smiled and looked towards the heavens. My new 78 year old friend from South Carolina who rode up with her church group arriving that morning at 8AM and was leaving at 6PM back on the same charter bus, thanked God and then told me again how we all need to do our part to help this man create change in our country.
After the swearing in, I started the walk back towards home walking past the various museums. I passed the Air and Space Museum and didn’t see any lines getting in- so I just walked up the steps and walked in! Warmth! Bathrooms! Places to sit down ! Not to mention, I was in one of the best museums ever, one that celebrates the human spirit and all we can do when we put our minds to it! We walked on the Moon. We flew around the world, We made air travel as common and safe as bus travel. I wandered all over the museum and again thought of how wonderful to be in a country where any thing is possible with hard work and the opportunity. I finally warmed enough and was shocked- all those people on the mall had also tried to get inside, but had to face hundreds of people ahead of them also trying to get in. My leaving allowed one more person to come in.
What a Day! What a Country!